How was the moon formed? 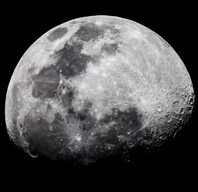 Even though we may not see it, we know it is there revolving around our planet. There are numerous legends that tell us about how it got there. One of them, which originated in Patagonia, says that the moon was created so that there would continue to be light when the sun went down to stop evil spirits being able to wander the Earth.

But what really happened? And how long has it been there? According to recent studies, the moon is around 4.5 billion years old! Now, as you can imagine, no one knows exactly how the moon was formed, but there are several theories that explain how we have this satellite.

The first theory states that the moon is a part of the Earth. According to the supporters of this theory, they believe that at the moment of the Earth's formation it was rotating so quickly it caused pieces of the Earth to be "ejected" into space, and the pieces from the Earth later fused together to form what we know today as the moon.

The second theory says that the moon is a kind of "errant planet".  As this satellite was transiting the solar system it was "captured" by the Earth's gravity and became a moon.

The third theory suggests that a giant meteor crashed into the Earth and that the fragments that were launched into space joined to form our satellite.

The fourth one believes that at the moment of the Earth's creation the planet was so hot that many different rocks and metals evaporated. Since there was no atmosphere to trap these vapors, they went directly into space. There, these vapors of metal and rock cooled sufficiently to condense together to form the moon.
There are of course more theories, but these four are the most commonly accepted. The truth is each one of them has the charm of true legend:  but which of them is correct?