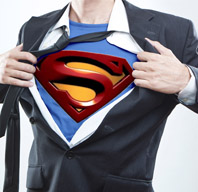 Is it a bird? Is it a plane? Whenever we hear these two questions, we can be pretty sure we are most likely watching the most famous superhero of all time.

Surely you know the story of how he came to be: Kal-El was sent to the Earth by his parents right before his planet, Krypton, was destroyed. There, on Earth, he would be adopted by the Kent’s, a childless couple who taught young Clark to be kind and thoughtful, and to use his powers for the good of mankind, causing Clark to make the decision to become a superhero. He left for the city of Metropolis where he would become a reporter. At the newspaper, The Daily Planet, he would meet Lois Lane as well as the notorious villain, Lex Luther.

But who had the idea to create the invincible hero in the blue suit and red cape? The answer is not one but two young men from the United States, Jerry Siegel and Joe Shuster. These two writers originally planned Superman to be a villain! In 1933, Siegel published a short story in a magazine about an evil villain with telepathic powers titled, The Reign of the Super-Man. However, the character didn't convince him and he decided to make him into a hero and give him different features. He borrowed some elements from Flash Gordon (the hot comic at the time) and gave him an outfit similar to what a circus strongman would wear. Finally, he added a giant "S" to his chest so that he would be more recognizable and unique.

I'm sure you're going to ask now, what about the cape? That excellent question still doesn’t have an answer, but there are some theories. One of them is that the cape is a sign of nobility, while another says that he wore it so that you could see more clearly in the comic that he could fly faster than the wind!

In fact he flew so fast that in just a short time he wasn't only the first, but the most famous of his companions. How do we know that? If I were to say "superhero" who is the first one to come to mind?!