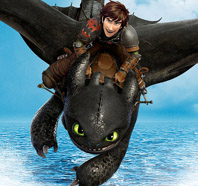 It's been four years since we left Hiccup and Toothless and some things have changed on the Island of Berk: peace with the dragons means the new sport of dragon racing has taken hold. But Hiccup, with his way of always wanting to go "above and beyond", chooses to explore new lands along with his dragon, Toothless.

Everything seems to be going smoothly in this new era, but on one of his journeys, Hiccup and Toothless happen upon a band of dragon hunters wishing to break the peace.

To be perfectly honest, we loved the first half of the movie. The story and the quality of the animation are spectacular. But would the second half live up to the beginning of this film? With the introduction of new characters and a couple of surprises, yes it does live up to first half. The characters have also shown more maturity in this sequel and there are more things to say but we won't!  Do your reckon this saga follow will follow in the footsteps of Harry Potter? Sounds good to us, doesn't it?