Do all planets have to orbit a sun? 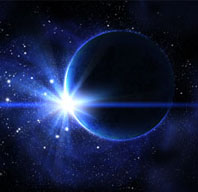 Astronomy documentaries and even science fiction movies that take place in other galaxies always show planets revolving around one or more stars, but do they have to revolve around the sun?

It may seem strange, but they really don’t. In fact, several “rogue planets” have been detected that don’t gravitate around any star, drifting instead in solitude about the universe.

If these are “astrological rogues” (what a great name for a science fiction movie), then where do they come from? Scientists haven’t reached an agreement. Some think they are planets that were expelled from their sun’s orbits, possibly knocked out of orbit by some larger object causing them to revolve around their star at such an accelerated speed that they ended up being shot away. Another possibility is that their suns died, and due to a lack of any star to attract them, these planets have been left to float off into eternity.

Other astronomers think these rogues are actually the remains of smaller stars. This would mean that they’re stars that were so cold that they couldn’t emit the gasses that they’re composed of. According to this theory, it would be incorrect to refer to them as planets.