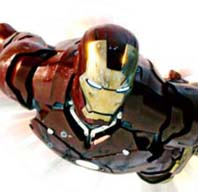 Today, Iron Man is one of the most famous fictional characters, and movies about him have been widely successful. Did you know that at one time this superhero was a controversial figure that was later nearly forgotten altogether?

The story of Tony Stark begins in 1963, a time when Vietnam War protesters cries for peace and harmony filled the air. Stan Lee however decided to create a character –get this- of an arms dealer. According to the author himself, his intention was not to mock anyone, but to “turn a hated person into someone capable of doing good”.  The character was also given a Marvelesque feature: a special weakness. Tony Stark has a piece of shrapnel lodged in his body that poses a threat to his heart and that he tries to contain with his armor. Iron Man must fight for his life as he fights to save the world.

So here we have a millionaire who becomes a superhero with a ton of gadgets to help him accomplish his missions. We can’t help but see the similarities between him and Batman, and we can assume that Marvel couldn’t either. So the comic creators decided to give Iron Man something that Batman didn’t have: a dry sense of humor and a cocky attitude. While Bruce Wayne is gloomy and serious, Tony Stark appears in all his shiny armor and arrogance.

The character however earned limited success, at least in Europe. His star didn’t start to rise in Europe until his movies started coming out. The film version of Tony Stark is more modern and funnier than the comic book version, who at times seems like a workaholic that would fit in better in the 70’s or 80’s than the 2000’s.

Iron Man was and is a great superhero and an inspiring character who many say now is even better than Superman and other older heroes. If you don’t know good old Tony… what are you waiting for?