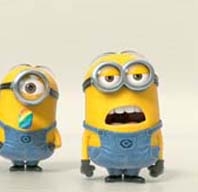 This month we’re talking about the sequel film that tells the tale of Gru, the terrible villain who turns out to not be so bad, and his hilarious yellow henchmen. By the end of the first movie, this nice bad guy has quit his “job” to look after three orphans, Margo, Edith, and Agnes. He doesn’t stay retired for long however, which is understandable given today’s economic situation.

Gru’s return to work is unexpected: an organization that fights evil requires his services! Yes, it seems that our hero will have to cross enemy lines…well…you know what we mean. Will everyone’s favorite villain-turned-exemplary-dad fight evil? Will he fall in love? We really don’t know, but we can’t wait to watch the movie to find out.

Many viewers praised Despicable Me 1 as a creative idea, as the movie told the story from the supposed bad guys’ point of view, something very new to animated films. Its humor and enjoyable characters made the first movie a box office success that earned positive critical reviews. Will part 2 be as good? We’ll have to watch and see.