What are the strangest sports? 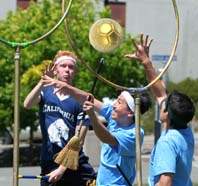 There was a time, believe us, when people found it very unusual to see various people playing a sport that consisted of kicking a ball into a goal. However, today football is “the beautiful game” in many countries. Could the same happen to any of these "rare" sports described below?

Disc golf: Its name says it all. It is playing golf but using a flying disc (Frisbee) instead of a ball. And you don’t put a ball into a hole, but instead you fling a disc into a basket attached to a mast. The winner is the person who completes the most “courses” with the fewest attempts at getting the disc into the net.

Quidditch: Yes! The sport of the famous novels and films of Harry Potter exists. But you do not have to be magicians to play it, with things as they are; some of the spectacle is lost. It is basically the same as the game Harry plays, but it takes place at ground level and the brooms do not fly…and now you might ask, What about the golden snitch? There are two ways of including it: it can be a neutral player dressed in yellow, or four neutral players passing a golden ball around that never stops. It looks like great fun!

Underwater Rugby: This is a cross between rugby, water polo and diving with the aim being to sneak a ball that can float into a basket anchored to the bottom of the pool. It was created as a training exercise by German divers.

Sepak takraw: Imagine that you can use your feet when playing volleyball. This sport is more or less like this! Of course players do some acrobatics that would be the envy of Oliver and Benji.

Ultimate: We return to Frisbees with this sport that was created in 1967. In short, it is a sport similar to American-football with the ball being replaced by the Frisbee, with a distinction being that the person who receives the disc can not move from their position to make a pass.

Do you like any of those? If so, you should know that all of the sports are official and have their own international federations.