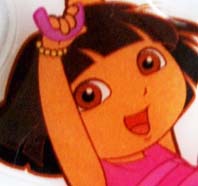 This adventurous seven-year-old has become one of the most well-known cartoon characters to both children and parents. Some like her television series; others love that her adventures are educational and teach English or Spanish.

Dora Márquez, as she is called, was born in 2000. Or at least she was for television purposes; what few people know is that her first appearance took place in a theater. Her creators, Chris Gifford, Valerie Walsh Valdes and Eric Weiner initially came up with the character as a way to help teach Spanish in grade schools.

The heads of a well known television channel did not want a TV series but a show that was performed in theatres, stadiums and halls: strangely a theater show was cheaper than a TV series. Also, Dora would not be a human, but a bunny that lived in the woods with a group of friends. The creators, however, wanted Dora to be a human child from the beginning because they believed she would connect better with the public in this way.

The creators of the show got their wish and Dora was finally a Latina girl. A structure for the stage show was also designed: it would be the journey of a self-assured girl with the help of friends looking to achieve a goal along with the audience.

This structure was simple, but very powerful, and the television channel quickly saw that they could make a television program that would be hugely successful.

They were right and now Dora is a benchmark in the world of animation and educational television. A large group of entertainers, teachers, specialists and even historians are involved in every episode. A good example of it being possible to learn and have a good time.