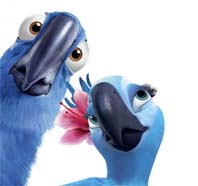 The only two blue macaws in the world are now not alone. Jewel and Blu have had children. Now they are happy parents living a quiet life in the city of Rio de Janeiro. But there is a problem: Jewel is worried that the little ones are losing their roots and decides to return to the Amazon for a while. Of course Blu does not like this idea, but ends up accepting it. What he does not know is that Jewel will find her lost father and the rest of the family will enjoy living in the jungle. As if this wasn’t enough, an old enemy returns to complicate things.

The film promises to be spectacular in many ways, and at least as lively as the first part. Also, as you can imagine, it will be a film that will delight both children and parents. What is unknown is whether it will, like the first film, get nominated for an Oscar. Why not watch it for yourself?