The rarest fruits and vegetables in the world 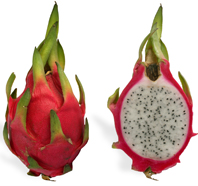 Carambola (also known as starfruit): native to Indonesia, this long yellow fruit is shaped like a star. Ripe starfruit has a sweet taste with tart and sour undertones. This fruit is often used to adorn Asian dishes.

Romanesco: is a cross between broccoli and cauliflower that originates from Italy. Its intense green color and interesting shape, featuring peaks that seem to emerge from other peaks, make it looks like something designed by a computer. In fact, many math teachers use this vegetable as an example for how the laws of math are found in nature.

Fiddlehead fern: In parts of France, Asia, the USA and Canada, these young fern leaves are eaten. They have a rolled shape much like the head of a fiddle. In fact, in Spanish we translated the name literally to “voluta de violin” because we could not find an adequate translation. Fiddlehead ferns are served like asparagus.

Uruapán Banana (banana with pits): this curious fruit is found in the heart of Mexico. Its color and texture are very similar to that of a ripe banana but on the inside large black pits are found. The fruit itself tastes similar to a papaya and its seeds are often used in traditional medicine.

If you investigate, you will see that there are many other interesting fruits and vegetables that you may want to try with your next meal!

How can we help you?Speak with an advisor for personalized attention
Receive Information
“Joke”
A history exam[Read joke]