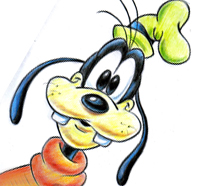 Many screenwriters have experience with secondary characters that end up becoming main characters. This is similar to what happened with Goofy.

In 1932, Goofy appeared in the short film “Mickey’s Revue” as an old dog with a hat that spent most of his time laughing and eating popcorn while Mickey tried to perform a musical number. The character, called “Dippy Dawg” was so funny that he appeared later in another short Mickey film about a party.

The animators thought that it would be a good idea to bring Dippy Dawg into some movies featuring Mickey Mouse and Donald Duck. Since his name was a bit complicated, they decided to change it to Goofy. The trio formed by the smart mouse, grumpy duck and clumsy dog became quite a hit.

In fact, the trio was such a hit that their adventures quickly became Disney classics. In fact, at one point they decided that Mickey was too laid-back compared to Donald and Goofy. So, Mickey was actually cut from some movies featuring these two characters.

Of course, some of you may be thinking: “but Goofy has always appeared alongside Mickey…” This also has an explanation. Donald became so popular that the producers decided to give Donald his own show and therefore pair Goofy with Mickey. Interesting, right?

How can we help you?Speak with an advisor for personalized attention
Receive Information
“Joke”
A history exam[Read joke]