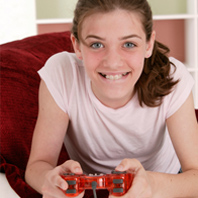 If there’s one thing that parents, psychologists and experts argue about, it’s the controversy that surrounds videogames. Are they good or bad for our kids? Is the view different now that the generation that grew up with Super Mario and Sonic the Hedgehog has children of their own?

We’ve all heard arguments in favor and against: on one hand people talk about aggression, anxiety, inactivity (linked to obesity), lack of social skills or even addiction. On the other hand, proponents of videogames talk about the increase in self-fulfillment, development of reflexes and coordination, or the stimulation of concentration.

Of course it’s not all black and white. Like anything, the world of videogames has its good and bad points. It’s the line between pro and con where we parents get involved. Many of us have played (and still play) videogames, so we know full well that Donkey Kong is not the same as Call of Duty, in the same way when it comes to films that Finding Nemo is not the same as Saving Private Ryan.

So it’s important to choose what videogames we give or recommend to our kids with caution. To that effect there is an age classification, the Pan-European Game Information, or PEGI, which is shown before videogame TV adverts. You can search it on the internet.

This doesn’t mean we should leave it all up to a series of logos. We should play an active role in choosing the videogames. Do we want an educational game or one to just have fun? Will we play with our children? These are all questions we must ask ourselves.

It’s also important to set some rules with regards to using videogames, as if it were like watching TV, using the computer or going to play outside. Let’s ration the amount of time our kids play these games, so they know that homework comes first, and only after can they enjoy more time for leisure.

Obviously it’s not our intention to set rules without advising parents and giving them information that seems important to us.