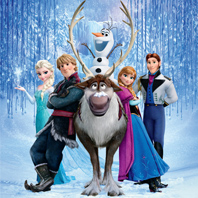 It is about a kingdom condemned to a curse of eternal winter. Anna, the sister of the snow queen, decides to break the curse. To do this, she will rely on the help of Kristoff, a daring but crude mountain climber; Sven, a reindeer; and a curious snowman.

With this film, it is said that Disney is returning to its roots: not because it is a story of princesses, but because it is based on a classical story. In this case, on the book "The Snow Queen" by Hans Christian Andersen. The film version is not entirely loyal to the book, but the spirit of the great Danish writer remains intact.

Disney's intention to adapt this story is nothing new given that, in 2002, they had already created a project about The Snow Queen that was, however, rejected. They had to wait until 2010 before the producer showed an interest. Initially, it was going to be a "traditional" animated film (see the link to "how to make an animated film") but when John Lasseter, the Pixar "boss", read the script, he thought that is was a better idea to computerize it.

The result? They are some who say that in many cases the film reminds them very much of "Tangled"; and others say it is a beautiful film to see, if for nothing else then its scenery. Unsurprisingly, the animators visited snow-covered national parks, an ice hotel in Canada and distinct Norwegian winter landscapes to acquire information and gain inspiration.

It is a good story to enjoy and prepare yourself for the cold winter in a warm cinema room.