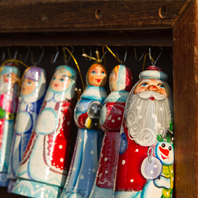 It’s likely that this year hasn’t been all that great for Father Christmas and the Three Kings in Spain. We mustn’t forget that Spain is experiencing an economic crisis and that this phenomenon affects even those at the very top. This means that although everyone has the best intentions, we need to remember that our bank accounts may suffer as a consequence.

What can we do to help? Let’s think for a moment: do you all receive presents from both Father Christmas and the Three Kings? Perhaps we should consider just asking one another for a little gift from the Kings.

We can also ask for fewer things. Before making a note of something, think about whether you’re really going to play with it, if you already have a similar toy even if it is a little bit old and whether this film or video game which, as much as you like it, would be better to buy in its simplest form rather than in the version which also comes with a doll or poster.

Are we also asking for things which only satisfy our interests and do nothing else? For example, if you have a love for drawing, why not ask for some felt-tip pens which can also be used for art classes at school? Or you could ask for protective clothing for when you want to go ice-skating.

It could be another good idea to ask for something which the whole family can use: a question and answer or dance video game, a board game, a DVD which everyone would like…

Oh and most importantly, let’s never ask for something while thinking “the price doesn’t matter as the Kings will buy them”. They have a budget and have to buy and make toys for all the children in the world.

Therefore, during these Christmas holidays, let’s bear all of this in mind. It may be that these holidays are a little more “modest”. However, I’m sure that they’ll be equally fun and that the presents will also be fantastic!p

How can we help you?Speak with an advisor for personalized attention
Receive Information
“December Joke”
The reindeer and the camel[Read joke]