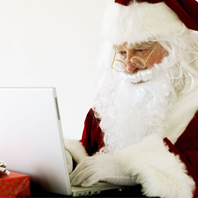 We’re going to tell you about the story which describes how Father Christmas used to be called Nicholas, that he was born in 280AD in Turkey and that he became a priest after losing his family during a plague epidemic. From what we know, he travelled a lot to help people in need and performed miracles including curing children.

But the start of his activity as a present-giver took place when he found out that a poor widower and father of three children had become truly poverty-stricken. One night, and without anyone seeing him, Nicholas entered through the window of the house of the widower, saw that the socks of the children were hanging in front of the chimney to dry and put a bag of gold in each one.

I’m sure that the fact that Father Christmas used to be called Nicholas and that the person responsible for delivering presents in Holland is Saint Nicholas is known by all of you. Yes, they are the same person too. However, there is something very curious about it: the Dutch people who arrived in America in 1634 took the tradition of Saint Nicholas with them, which translates to Sinterklaas in Dutch. However, the Americans who spoke English ended up adapting this name to fit with their own language and called him “Santa Claus”. Who the Spaniards call “Papá Noel” must come from his French name, “Père Noel”, which translates to “Father Christmas” in English.

And from then onwards, we have been giving presents to each other every Christmas. Therefore, if one day, someone comes to you saying that Father Christmas was created by a drink brand or that his clothes are red owing to the colors used in the label of this drink, you can tell them that this is not the case: Father Christmas has been wearing red since 1869 and this famous drink was created in 1886. If a cousin tries to ‘outsmart’ you this Christmas, you now have our full permission to correct him or her.