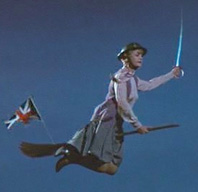 For once, and not to be taken as a precedent, it seems that none of this May’s movie premiers really look like they’re worth seeing. We didn’t want to leave this section blank however, so we’ve decided that it’d be a good time to recommend a “classic” to premier at home. So get ready to pop up a bowl of popcorn and cozy up on the couch (considering the price of movie tickets these days, you’ll save a small fortune).

So, that said, we’ve hunted through the classics and we think we’ve found one you’ll like: Bedknobs and Broomsticks. Yes, it is a movie from 1971, but it’s got it all. Just listen to the plot: during the World War II, Miss Englantine Price is placed in charge of taking care of three children that have fled from the German bombings in London. She’s not very happy with the responsibility, as it gets in the way of her real job: master her magic skills to help her country win the war. Each month, she receives a new lesson in the mail from her witchcraft course, fulfills tasks like a good student, and hopes to graduate and receive as a reward the definitive spell that will save England. When the last lesson gets lost, she doesn’t hesitate to set off in search of the spell, even if it means having to drag along the kids to London’s roughest neighborhood, to an island on which animals behave like humans, and to a strange battle with the German military.

This may not be one of Disney’s most well-known movies. That’s because not many people saw it when it came out, even though it did earn an Oscar in 1972 for best special effects (by today’s standards, they seem a bit primitive, but back then they were totally awesome). The funny thing about this movie is that it was the producer’s plan B film: If its soon-to-be-released Mary Poppins flopped at the box office, they would quickly release Bedknobs. Since the adventures of the supercalifragilisticespialidoshis nanny were a huge hit in 1964, the script of this month’s recommended movie ended up getting shelved for 7 years.

The result for us is a great movie full of: magic, action, humor… perhaps at times very “English”, ideal for afternoon viewing. It’s even more entertaining than Mary Poppins, the main character’s mission is after all more important than educating a few spoiled brats.

So don’t miss out on the opportunity to watch it. If you like The Chronicles of Narnia and Harry Potter, and you like soccer (we’re not going to give away any more) than you’ll love this movie.