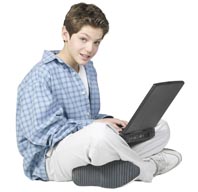 To get an idea of the relationship between kids and technology, all you really have to do is check out Youtube videos of children trying and failing to turn the pages of a magazine because they think they have to swipe the pages like they would on a digital tablet. While some people will just smile and say there is nothing wrong with that, even saying it's a good thing as it shows the skills these kids have adopted as a new generation of digital natives, others are horrified to think that technology has rendered many children incapable of doing something as simple as turning a page.

Who is right? Many specialists are looking at the impact new technology has on child development. All of this is nothing new, the question dates back to the eternal debate over the influence of video games.

Where I do agree with specialists is that some issues around this subject have often either been misunderstood or exaggerated. That is what researchers like Lydia Plowman and Joanna McPake have found after one year of studying the use of mobiles, tablets and consoles with children.

First of all they dismissed the term digital natives. Many children said that it was hard for them to use a computer, and they didn't feel as comfortable using them as their parents may have thought. The research also paradoxically confirmed that kids learn to use technological gadgets by imitating their parents: the oldest learning system in the world.

It also showed that life for children does not revolve around technology, and that they don't become digital hermits, completely detaching themselves from the outside world. Most of the children involved in the study that often used digital devices also continued playing with friends in the street and spending most of their weekends doing activities with their parents.

The researchers also debunked the myth that interactive games are more educational than traditional games. They noticed that although interactive games did teach kids how to use a device, they didn't necessarily give kids a better understanding of the world around them. The conclusion was that no form of technology is clever enough to adapt to a child's learning needs like a teacher.

They also dropped the idea that repeated use of technology hinders social interaction. Researchers saw that children seemed to interact even more in asking how an application or device works. The real danger is isolation, which is something that can occur with or without the use of technology.