Justin and the Knights of Valour 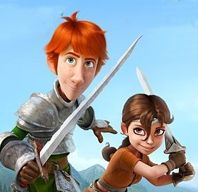 Justin wants to be a knight like his grandfather was in his time. However, he is met with the opposition of his own father who wants him to be a lawyer like himself and in his own kingdom, a kingdom in which knights have been banished and only bureaucrats remain. Unable to fulfill his dream, he decides to escape and find, by himself, a way of being worthy of possessing a shining weapon. On the way he will come across beautiful female warriors, forgetful wizards, older ladies played by renowned actresses…and plenty of adventures!

This is the plot of the Spanish animated film which has an international appeal. Produced by Antonio Banderas, who is also the voice of one of the characters both in Spanish and English, it promises to be a smash hit similar to "Tadeo Jones". Its attractions include an action-packed story, characters played by celebrity actors and a carefully-chosen setting which transports us to this fantastical period of the Middle Ages, a place which we have all dreamed about at some point.

With the charm of a fairytale and the latest animation technology, "Justin and the Knights of Valour" is a good film to relax to during the going back to school season.