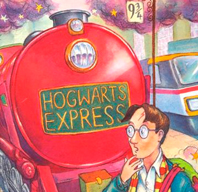 We all know the young magician with green eyes and glasses whose forehead was scarred by the most evil magician in history. But, what are the origins of his story?

According to an account from the author of the books, J.K.Rowling, the idea suddenly came to her back in 1990 during a four-hour train delay which was supposed to be taking her from Manchester to London. Even the characters came into her mind fully developed.

However, due to various problems, family circumstances and the loss of her job, the writer couldn't complete Harry's first adventures until 1995. Thanks to our curiosity, we can tell you that various chapters were written in a pub called "The Elephant House” and the pub reveals its pride via a plaque on one of their tables which reads “Harry Potter was born here".

As is often said, “with all the difficulties that come with writing a novel, the most difficult part is selling it.” Harry was rejected by numerous publishers until one called Bloomsbury decided to publish her first book. And do you know to whom she owes a debt of gratitude? One of the editors of the company! As soon as he gave his youngest daughter the first chapter of "The Philosopher's Stone" to read, he asked Rowling for the second book!

The publisher still didn't want to risk too much and only published 500 first edition copies (of course, these copies are now treasures amongst collectors). However, various reprints had to occur before word of the book spread which turned it into an incredible sensation… Today, more than four hundred million copies of the seven books have been sold! And surely you've all read at least one of them!

We have to end this article now and we haven't ended up shedding as much light on Harry himself as we have on his birth. But all of you already know his story. Moreover, it's always good to know where our heroes come from!