How are volcanoes made? 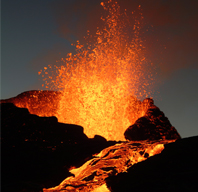 Volcanoes for some can be frightening but fascinating. The idea of a mountain becoming a fire breathing monster that can wipe out everything around it can be quite chilling. We have all seen a volcanic eruption on TV, but how are they formed?

The easiest way to explain the phenomenon of volcanoes is by saying that they're points on the Earth's surface from which extremely hot substances are expelled, including magma, gases and liquids.

Volcanic activity is caused due to friction or a collision of two tectonic plates, those giant puzzle pieces that make up the earth's crust. Cracks are formed at certain points between the plates where pressurized magma builds up forming a chamber or a reservoir that ends up rising to the surface. What initially starts as a crack becomes a mound due to the pressure of the magma below. As the cold lava is deposited around the crack it forms a "chimney" and continues flowing through it.

It depends entirely on how each volcano is formed, but I'm sure you've noticed that lava flows out in different ways depending on the volcano. Whereas some eruptions are more violent, others are quite quiet. There are four common types of eruptions: The Hawaiian is comprised of very liquid lava and does not include a burst of gas. The Strombolian, this is flowing lava but which also throws rock fragments called "bombs". The Vulcaniano, which is similar to the Strombolian but in addition it also produces ash. Finally the Pelean, which has lava that solidifies so quickly that it covers the crater. The lava then pushes the plug which has formed over the volcano and forms a volcanic needle.

That was a quick summary of a formation of a volcano, as well as some of its basic eruptions. If you want to find out more go online or have a look in a geography book, it really is quite a fascinating subject.