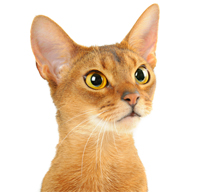 A few months ago we told you how different breeds of dog came about. We discussed the wide variety of dogs and how a small poodle might have descended from the wolf. But are there different breeds of cats? We’re sure many of you have your own kitty at home and have asked yourselves the same question.

The answer is that breeds of cat do exist, but we admit that telling apart a British Shorthair from a Bengali is not as easy as distinguishing between a Saint Bernard and a poodle.

Perhaps it’s due to the fact that while dog breeds were created for the purposes of hunting, guarding houses or shepherding cattle; cat breeds were created for exhibitions and to “be shown”. We’re not saying they’re useless: since the world began, cats have shown themselves to be very effective rat catchers and very loving when keeping company: what’s more, we could say that they’re so good at those two things that they wouldn’t need to be “improved”.

Indeed, it was precisely because of those two characteristics that cats came to Europe. One legend tells how some Greek ambassadors in Egypt, after seeing how good cats were at controlling plagues, decided to take a couple of cats to their country; and so all the European domestic cats descended from that couple. It’s probably not true, but it’s a nice thought.

What is certain is that all cats were just cats, regardless of their colors or hair length, until 1871, the year of the first cat exhibition, which was held in London. And at that exhibition, kittens were distinguished simply depending on whether they were Persian or European and what color hair they had. From the second exhibition they started to try mixing breeds…there were even some bread with wild cats!

Nowadays there are approximately 40 breeds of cat that exist in the world. We can’t tell you them all because there’s not enough space; but we can list the four categories that they’re divided into: Persian and exotic, which are are pug-nosed cats with big eyes; semi-longhaired, with long hair but not as long as Persians; shorthaired; and oriental, like Siamese.

If you want to learn more about cat breeds then you can look them up on the internet. But one thing we can tell you: the best cat, the cleverest, the prettiest and the most loving will always be the one that comes home with you.