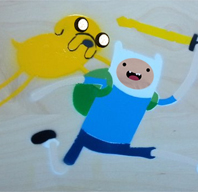 This is one of today's most popular cartoon series; I'm sure that you've all seen one episode of "Adventure Time" — and it's very likely that your older brother or sister or even your parents have watched with you. It's actually a ground breaking series and although its main characters are just a boy and his dog, there is something very different about the show from what we are used to seeing. But how did Finn and Jake come into existence? Why are they the way they are?

"Adventure Time" creator Pendleton Ward, is a big fan of the film "My neighbor Totoro" and "The Simpsons" series. That's clear from the beautiful and fantastical landscapes of the series and from the show's humor.  And what better characters for a fantasy world in which the hero can shout, "I'm crazy!" than Jake the Dog and Finn the Human?

Finn, as you all know, is the last human left on the Land of Ooo. He's a bit of a naïve teenager but he's generous and brave and he also wears a strange hat. There is a reason for this: in addition to making the character easier to draw, it's a "trade mark". Pendleton Ward has also said on one occasion that one of his favorite photos, which he feels captures his childhood, is one in which he appears wearing a bear hat next to a bulldog. Sound familiar?

And what child hasn't pretended to be in a fantasy world in which he goes on a multitude of adventures together with his dog or pet? Of course it's not the first child-animal companion duo that we've told you about. Do you remember Calvin and Hobbes? Some experts maintain that Finn and Jake may be based on them, especially in the drawings in which Calvin imagines being in other worlds. However, have you noticed that Hobbes doesn't appear in the majority of Calvin's imagined adventures?

The influences behind Finn and Jake can even be traced back to old epic sagas. They could be seen as an incarnation of the classic character of a knight in search of adventures and his faithful and realistic squire…wait a moment…adventurous knight and realistic squire? Could it not be that Finn and Jake are the modern-day "Don Quijote and Sancho Panza"? Food for thought.