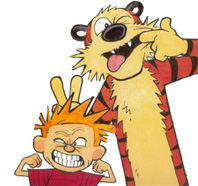 Imaginative, dreamy and clever… but also mischievous, lazy and whimsical. Above all charming: that’s Calvin, a 6 year old boy whose best friend is Hobbes, a stuffed tiger with a life of his own and wiser than a lot of humans.

This curious duo was born by the hand of cartoonist Bill Watterson in 1985 and ended in 1995. For 10 years their adventures appeared in 2,400 newspapers. The comic strips were later compiled in 18 books, of which some 30 million copies were sold. That’s a lot of followers.

Where is the secret of its success? For many it lies in the diversity of its stories; we can see Calvin at school (always talking back to his teacher Mrs. Woodworm), imagining he is a superhero or a space pilot (moments in which his imagination is gets him into heaps of trouble…or out of it), philosophizing with Hobbes while the travel downhill in a shopping trolley at full speed (the favourite strips of adult followers) or simply building a time machine with a cardboard box.

For others, Calvin’s popularity is due to the fact that Calvin is, deep down, an innocent child who we can identify with. He builds snowmen, he asks his parents advice when he feels lost, he loves milk and cookies, and his best friend is a stuffed toy.

But Hobbes has one peculiarity: he talks like a person; he has a mature personality, but does not renounce to his animals instincts. Many of you will be wondering how it is that a toy has life of its own. We can’t give you an answer: Watterson never gave a concrete one, so we will never whether Hobbes comes alive only when he is with Calvin or whether Calvin imagines that he is alive. Perhaps this is one more thing that gives charms to their adventures.

We won’t tell you anymore and invite you to discover the world of these two characters. For sure when you know them better, you will feel like we do: that we can’t be without them.

How can we help you?Speak with an advisor for personalized attention
Receive Information
“September Joke”
The Dog
[Read joke]