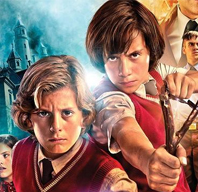 Do you remember that, a few months ago, in the characters section, we were telling you about the troublemaking twins Zip and Zap? Well, they're now coming back with a live-action film.

In "Zip & Zap and the Marble Gang", the twins are sent to spend the summer in a school which, rather than a school, seems more like a prison as the students are forbidden to play. Given that they are brothers, they don't delay in organizing a resistance group called "The Marble Gang" who, in addition to defying the power of the adults, will also discover a wonderful secret.

This film is one of Spanish Cinema's biggest hits this season; it's a movie for all ages as, in addition to being an adventure film, it brings back characters known by parents and, moreover, it is reminiscent of some legendary 80s films.

For this reason, many movie-goers are excited about the release of the film. However, for other people, there is a problem. Those that have seen it say that it reminds them more of the Harry Potter films or The Goonies than the classic Zip & Zap comics. What's more, some of them criticize the fact that characters like Don Pantuflo and Doña Jaimita (the twins' parents), the teacher Don Minervo and their friends such as Pelotín Chivatez and Sapientín Empollinez do not appear.

I'm sure that you're thinking, "Well then, are the people at Enfocamp recommending the film or not?" Well... let's take one step at a time: do you like films in which school kids are ingenious and are having the adventures of their lives? If so, go see it; are you familiar with the Zip & Zap from the comics and want to see how the characters have been adapted for the big screen? Well... perhaps you should wait for the second part.