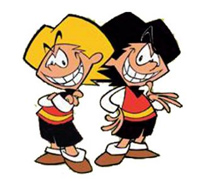 Imagine Bart Simpson had a twin brother who teamed up with him when it came to wreaking havoc. Now you have an idea of who are Zipi and Zape. By the way, the name stems from the word zipizape, which in Spanish means "raucous and disorderly fight".

These comic twins (Zipi is the blond one, Zape the dark-haired one) may seem very formal: they wear a red slipover, black shorts, shiny shoes... and they carry a tie. But don't be fooled: they are the nightmare of their classroom and will waste no occasion to pull off a prank or play some football; occasions which usually arise, of course, during the time when they should be doing their homework.

While they look like they are no older than 11 years old, they have been around for 63 years, no less. Their creator was the Barcelona-born cartoonist José Escobar, who was in charge of the cartoon until 1994, when the baton was passed to the tandem formed by Joaquín Cera and Juan Carlos Ramis.

Through the exchange, the storyline has been somewhat altered, but the backdrop continues to be the same: Zipi and Zape get into a whole lot of trouble, driving their parents, Don Pantuflo and Doña Jaimita, completely mad. Most of the time it is due to a hoax or scheme that comes out wrong; other times it is because they try to do a good deed, but end up spoiling everything. In the end, they are almost always punished, although sometimes they come out of their adventuress on top and even rewarded (especially if Pelotín Chivatez is involved in the action, the naughtiest child in the classroom). But one thing is clear: they are merely naughty, never evil by nature.

Many believe the charm of these stories lies on their repetition of the same formula over and over again. But others argue that their adventures have become obsolete: until recently, the twins wanted, above everything else, a bicycle (in the era of video game consoles); they were punished by being sent into the "mice room" when they got bad marks (who would even think of doing such a thing these days with children who don't do their revision properly?), and even their signature attire is more closely related to the 50s than to our days.

Could Zipi y Zape adapt to the new times? We encourage to give one of their old adventures a little read (we are certain your parents or older brothers must have one lying around) and to judge for yourselves.

How can we help you?Speak with an advisor for personalized attention
Receive Information
“January Joke”
Milk
[Read joke]