Did all dogs descend from the wolf? 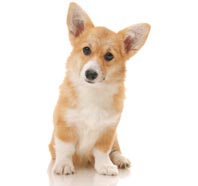 The idea of including this topic in the newsletter came about when one of the girls in our office couldn’t believe that Chete, her corgi dog (like the one you can see in the photo), is a descendant of the wolf. Probably it is something we all find hard to believe, could our playful, faithful and furry friends really come from this sibylline, unsociable and savage animal who has been the subject of the nightmares of so many people? (we should clarify that none of our team here think that wolves are unpleasant animals, we are just taking a look at what some people think of them).

This question, strange as it may seem, has been a controversial one. During the 20th Century the prestigious Austrian zoologist Konrad Lorenz declared that, depending on their breed, dogs could have different ancestors. According to him, sleigh dogs (such as huskies and Samoyeds) and German shepherds had descended directly from the wolf whilst bloodhounds and terriers were the descendents of coyotes and jackals. By extension of this it was thought that small dogs (like “Chete”) could be from the same family as foxes.

However, a recent study carried out by the University of California has shown, following the comparison of the DNA of wolves and of 140 dogs from 27 different breeds, that wolves and dogs are practically identical.

How is it, then, that there is such a variety of different breeds? A lot of time has passed since the first wolf approached a group of humans in order to obtain easy food (it is estimated to be around 31,000 years ago). With time, humans realized the potential of these wolves for hunting and defending their tribes from intruders and other animals. Furthermore, they were easy to domesticate because they have always lived as part of a pack.

With time it became clear that are specialized in a wide range of tasks: protection of livestock, defense, surveillance and even warfare (the Assyrians, Romans and Greeks all used dogs during battle). From these specializations the different breeds were born. For example, for rabbit hunting it was necessary to have small dogs, with short legs and a tubular body; whilst for the protection of a dwelling tall, strong and muscular dogs were needed, with the ability to charge after an intruder.

It was later on when the breeds that we refer to as ‘companion’ dogs arrived: those that don’t carry out specific tasks and who are simply a family pet, achieved through crosses carried out by professional breeders. These include breeds such as the Chihuahua, the Pekingese and the Poodle.

All that has been said thus far is just to give you an idea of how dogs can be classified, but it is not something ‘set in stone’: a German Shepherd can make a great family pet, just as a poodle can be so unfriendly that it would not really make a very good companion.

So now you know: be it a playful, active, tiny little thing or an enormous, woolly, tranquil tail-wagger, they all are of wolf descent. But you needn’t fear that one day your furry friend is going to flee the house howling at the full moon. I am sure that they will continue to closely guard your bedroom door instead.