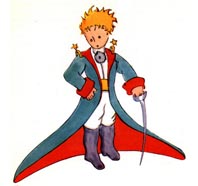 Even if you haven’t read the story, you have most likely heard of him because he is one of those characters that have ended up becoming more famous than their story: a little boy who lives on a small asteroid and who, fed up of the reproaches of the only rose that has managed to grow on his barren planet, decides to go traveling and ends up falling to Earth, where he meets a pilot with whom he becomes friends.

Well… we have just about managed to describe one of the finest stories ever written in a nutshell, which has made us feel a bit uneasy because there are so many interpretations, characters and meanings within “The Little Prince” that, speaking from a literary point of view, thousands of pages could be used in commenting upon this fable of just under one hundred pages: the fox who wants to be tamed and who symbolizes friendship, love in the form of a rose, the snake that represents nothing more than death (or perhaps he has some other deeper meaning), the drawings of a hat that turn out to be of a snake eating an elephant, the incident when the pilot declares that he doesn’t know how to draw lambs and so draws a box instead and states that the animal is inside it… everything has its own interpretation.

This beautiful yet complex story was written by the French writer and pilot Antoine de Saint-Exupéry. It is said that the idea came to him in a hotel in New York, where he was in exile following the capture of France by the Nazis during the Second World War. At that time he was already a well-known author thanks to his book “Flight to Arras”, published in 1942. However, despite this he felt unhappy and lonely. In order to prevent him becoming depressed, the wife of his publisher in America encouraged him to write a children’s story, a tale in which the main character would be the solitary nameless child that he was always drawing in his notebook and in his letters. Saint-Exupéry gathered up all of his emotions, thoughts and memories….and so “The Little Prince” was born.

The story was published in the United States in 1943, but did not receive good reviews. Then, in 1946 it was edited in France, turning it into a success and giving its author legendary status. Unfortunately Saint-Exupéry never lived to see his work become a classic: in 1944, during the Second World War the plane that he was flying was brought down by a German fighter pilot over the Mediterranean Sea.

Since its publication, children, adults, teachers, artists, philosophers…all have delved into the book’s pages. Suffice to say that the story has been translated into 115 different languages, it is one of the most read books in the world and the most read French work of the 20th Century. Many, many people have declared that it is their favourite book and few people have not been moved upon reading it.

So, if you have not yet read it, then what are you waiting for? It is never too late to discover a story that, amongst many other things, teaches us that “only with the heart is it possible to see well…….the most important things are hidden to the eyes”