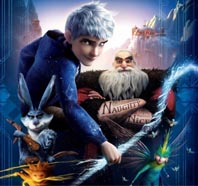 We are already well used to seeing groups of superheroes (The Avengers, Justice League…) but, how would a group of superheroes made up of fantasy characters who are guardians of all things childhood work?

This film answers that question: when an evil spirit called Pitch becomes a threat to children, Santa Claus, the Easter Bunny, the Tooth Fairy, Sandman (a legendary character who helps children to sleep) and Jack Frost (a character who brings along Winter and snow) all unite. They form a rather peculiar team ready and willing for anything and with the same abilities as the most valiant of superheroes.

Sounds good, doesn’t it? If we told you that the producer is the same one that brought us “Shrek” and the creators the ones that came up with “How to Train Your Dragon” then you can start to get an idea of exactly the kind of film we are talking about. So, if you are going to bring your parents along to see this film, be sure to inform them that you are not about to watch anything mushy: in this film the Easter Bunny is a tough guy, Santa in a big tattooed chap and Jack Frost is a rebellious youth. You can’t save the world by being precious you know.

Perhaps the only down side to the film is that the characters are more typical of the North American and English cultures, however we all know that they know how to make a good film. But you still can’t help but wonder when you go to see this film, how would a team of superheroes made up of the Reyes Magos, Ratoncito Pérez, Espinete and the Lunnis puppets manage?

Well, they do say that Spanish cinema is constantly looking for new ideas, so this is our suggestion!