How to solve sibling fights 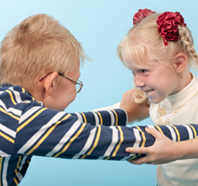 Some months ago we discussed the subject of the arrival of a little brother home. This month we will discuss one of its consequences: when fights between siblings happen.

We all know it is something inevitable, for sooner or later our children will end up engaged in an argument. What can we do when this happens? The most important thing is to keep calm, because what we don't want is to have three or four people arguing. In these cases, many specialists advise the parents not to insist on making them be quiet with a negative command: instead of saying "I don't want you guys to argue", we should tell them that "We want this to be over as soon as possible" or that "We want them to make peace".

It is also very important to treat both siblings as a unity. That way, they will realise that both of them have a responsibility in the situation, and that blaming the other sibling is of no use in these cases. This includes not asking who started the fight, so that our kids don't feel like we are taking sides.

What we can do is make them see that we understand their feelings and their anger. If the children see that we have a certain disposition they will relax, because they will feel that we are taking them into consideration.

It is also convenient to teach the children to control their nervousness and their anger. A good option may be teaching them exercises like controlling their breathing rhythm when they get angry, or even shaking their hands to "get rid of the annoyance".

On the other hand, and to avoid further altercates, it would be convenient that each of the kids has its own "private space". If it is impossible that each has their own room, at least they can split the drawers in the wardrobe and other furniture.

We know that these indications won't end the fights, but can make them more bearable or short. But, of course, given the nature of some arguments, we don't guarantee our method to work.