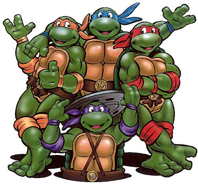 Some years ago - if you don't believe us, ask your older brothers- the Teenage Mutant Ninja Turtles were IT! We all had their dolls, hung their posters on our bedroom's wall, we all watched their animated series... What did these mutants have to be so popular?

Was it their history? We all know that four turtles turned into humanoids because of a radioactive spill, and were trained in the art of Ninjutsu by Master Splinter. But very few people know that the Turtles were, in their origin, comic characters that were part of a parody-homage to the work of Frank Miller, creator of "300", "Sin City" or "Ronin". So, as you can imagine, they were more adult-oriented comic books.

The history, nevertheless, was successful amongst the readers and the comic situations were enhanced. Both youngsters and children loved it, and the publishing company quickly started releasing related products and came to an agreement with a television producer to create an animated TV series. Of course, what ended up happening was that the comic books started developing side stories; in some of them, they even visited another character we talked about, Usagi Yojimbo, the samurai rabbit.

The television series was a great success: it was airing from 1986 to 1996 and was a complete phenomenon. The images of Donatello, Michelangelo, Rafael and Leonardo were all over the place... there even was a camera that would make a Ninja Turtle appear on its images (although this was just a sticker on the objective)!

In 1990 the movie (with real characters, not an animated movie) was released. It happened that, although it was intended for a juvenile audience, no children's movies producer wanted to take the commission because of the dismal characters, and an independent producer had to complete the task. The film was very, very successful (a person in our team recalls that, when it was screened in his school, the TV had to be taken to the gym because the demand to watch it exceeded the viewing room's capacity). There were two more movies after this one, with a lesser fame.

The same thing happened with the television series, which got cancelled in 1996. The producers tried to revitalise the saga in 1997, but they tried to include some characters (one of them a female Ninja Turtle) and the fans felt disappointed. Other attempts, like the 2003 series or the 2007 film, although very successful in other countries, went unnoticed Spain (does anyone remember that premiere?).

It may well be that what has happened is that the Teenage Mutant Ninja Turtles are the type of characters that grown-ups like more than children because it reminds them of their own childhood. But, who knows? Maybe they are peacefully retired back in their sewer after the huge success they had, because fame is also tiring...