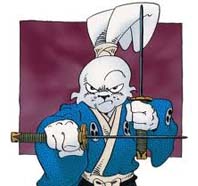 Can you think of a more tender and inoffensive animal as a rabbit? Well... maybe that will change when you meet Usagi, this month's character.

Usagi Miyamoto or Miyamoto Usagi, as he usually introduces himself (remember that in Japan the last name comes before the name), is a Ronin rabbit -a Ronin is samurai without a Lord to serve- who doesn't look like much of a thing, but who with practice and experience has become an invincible warrior. But don't expect a brutal, violent and revengeful swordsman. Usagi has witnessed and taken part in many sanguinary and cruel wars, and knows that the best sword is the one that's kept in its scabbard, until there's no other option but to use it. That's when Usagi shows that he is a strong, determined and deadly rabbit.

His first wanderings date from 1984, when the American-Japanese author Stan Sakai had the idea of putting into comic the adventures of his favorite historic character, Musashi Miyamoto, an errant Japanese warrior who lived during the peace period that followed the civil wars among Japanese nobles in the XVII (the age of samurais, ninjas, katanas and kimonos). At first, the major figure in this story was going to be an ordinary human being but, in a moment of inspiration, Stan Sakai drew a long-eared rabbit. He thought this animal was the perfect representation of what Musashi was, because in Japan the rabbit is a symbol for cunning (something like the fox in western cultures). This inspiration gave birth to an odd character and its world, in which all of its inhabitants (except one, Mr. Hikiji, who is precisely the bad guy) are animals.

The character, its adventures and its setting had an enormous success and, from then on, Sakai is one of the few privileged comic authors that can dedicate all their strength and time to one character. The best part is that Usagi's adventures never get boring, but are better with each new release: we see how Usagi grows up, and meets peculiar characters. The only reproach would maybe be that he is not so well known in Spain, and that the waiting time between issues may take too long.

Nevertheless, there are already a lot of stories edited (around 23 volumes with more than 100 pages each). So if you want to discover this sage character, don't doubt it and read some of his adventures: you'll meet one of those characters that you can really call a "friend".

P.S.: Now that we remember it: if you are a fan of the Teenage Mutant Ninja Turtles, Usagi will ring a bell to you, because he has taken part in some of their adventures too. The other way around, too: you can see Leonardo, Michelangelo, Donatello and Raphael in Usagi's albums, forming a very peculiar team.