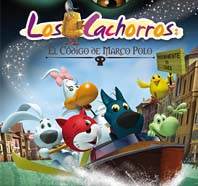 It may well be that you have at some point watched on TV some of the episodes of a series starring these funny little characters: six amusing puppies that, through their adventures, discover the World.

Being such a success series in 40 countries, a movie on it couldn't have lasted too long. This is the film that we suggest you this month: "Pet Pals: Marco Polo's Code". This code is found in an old spell book which belonged to the famous Italian adventurer... and is about to fall in the wrong hands. The puppies will flee from Venice in their quest through the world. Will they be able to find it before the evil Crow Witch does?

An adventure film according to the classic tradition: magic, action-packed rhythm, humor, and a many places to see and discover. The film has everything, and the movie critics know it: it was finalist for the Best Feature Film prize at Animacor 2010, and has won the "Kineo Diamanti al Cinema" prize at Venice Film Festival 2011. Good references aren't missing, that's for sure.

Apart from that, we've been told that it is one of those movies that please both children and grown-ups. You shouldn't miss it by any means.