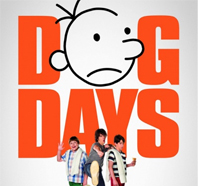 The school is finally over! And Greg Heffley is decided to forget all his school "adventures". How does he want to do it? Just as everyone else: lying around, playing videogames, no obligations, no responsibilities, no stress... and no family! Nevertheless, Greg's mom has another plan: and it is to go - altogether, like a happy family- to places like the public swimming pool. And, as you know, "Where a captain rules... his mother rules even more". So he has to bear with it and adapt to the situation. What's the bad part? That adapting and bearing with it is equal to trouble for Greg. What's the good part? That we love watching him do it...

If you have read the saga of this poor "wretch" you will probably be shocked at the fact that the third sequel of his movies is based on the fourth volume of the book series. Do not think that the third book was terrible. Just think for a second: what book would you have chosen to make a film that will be released in the summer?

Another factor to take into account is something that has always been on Greg's fans' mind. You know that in the books the illustrations have a certain style: the main character is a funny doodle with whom it is easy to connect, and, naturally, many people think that the actor in the film "is not Greg". The question they ask is obvious: why hasn't an animated film been made respecting the original design of the character? Truth be told, we don't know, though we admit that we would also like to see an animated Greg on the big screen.

Maybe there is one someday, but meanwhile let's go watch his movies; this one looks like a very good movie to spend the last days of the summer to. Furthermore, considering what happens in the movie, we probably have made some prank like the ones carried out by Greg. So it is nice to see it from the outside too.