How did Saturn’s rings form? 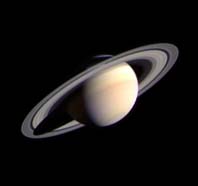 Their image is so recognizable and fascinating that many of us have, as kids, drawn Saturn when we've imagined an outer space scene. Its rings amaze and intrigue us. How did they form? What are they made of? How long have they been there? These are questions we have all asked ourselves. We are going to give an easy answer to them.

No one knows for sure how they formed, but there are two theories: one states that the rings were formed by suspended particles that started orbiting around Saturn's equator, and that due to the planet's gravity, they didn't get to collide and form a moon.

If this theory sounds funny, the second one is spectacular: some experts speak of the destruction of one of Saturn's moons. A big enough comet or a meteor would have collided against that moon, destroying it, and its fragments, disperse, would have formed the rings some 100 million years ago.

However, there is another fascinating theory that is gaining strength in the last years, and that could explain the origin, if not of all, of one of Saturn's rings. The "E" ring seems to be composed of suspended ice particles that would be no older than a million years of age (that's a very young age in space coordinates). How did it get there? The answer could be in the giant geysers found on a moon called "Enceladus". As you know, a geyser is a sort of natural fountain that pumps a column of water or vapor upward. Well, the geysers in "Enceladus" are so big and powerful that they could pump their load into outer space, and it would freeze due to the low temperatures beyond its atmosphere.

Many other scientists think that all of the previous theories are right, and that the rings have been formed by the mixture of the different circumstances we have mentioned above. In the end, there are different rings with different composition (there are ice rings, stone rings, iron oxide rings...) so, why couldn't it be that a moon exploded, and the particles released joined other suspended particles, and to which be added the ice from the Enceladus geysers?

By the way, what is not put into question on this subject is the fact that Saturn's rings are not solid. The particles composing them are so tiny that we could cross them like we cross the fog or a dust cloud. In some way, it is a shame that we can cross from ring to ring as we jump from rock to rock to cross a river.

Whatever it is, and whatever theory is correct, it is very probable that Saturn's rings will stay where they are for a long time, catching our attention and making us dream with space travels. If you ever see that planet through a telescope, think about this: whatever happens in the world, you will still be able to show that same rings to your grandchildren.