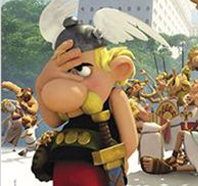 It has been some time since we last talked about Asterix, the clever Gaul who has fought against the Roman conquerors ever since he appeared in his first comic created in 1959 by the artists René Goscinny and Albert Uderzo.

If you are fans of this character´s adventures you are in luck because a new film featuring a whole new adventure has just been released in Spanish cinemas: Asterix and the Land of the Gods.

On this occasion we are reintroduced to Asterix, Obelix and all the other characters who live in this irrepressible Gallic village.  In this film Caesar starts building a complete resort city next to their town.  His aim is to captivate the Gauls’ interest in the comforts offered by the Roman Empire. Will they give in to the temptations?

It is the most modern Asterix film and we are not just saying this because it is the most recent one nor because parts of it take place in a modern Roman resort; we are also saying this because it is the first all-CGI (computer-generated imagery) film featuring these irrepressible Gauls.  What will it be like to see the Romans running around in 3D?

There are several reasons why we recommend that you go and see this film: apart from the fact that it is very funny and that you will be able to get reacquainted with an old friend, this film will also teach you that we often focus too much on the materialistic value of objects and that there are more valuable things in life such as friends.