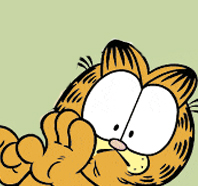 In 1978 the owner of an Italian restaurant had to make a decision. Should he sell a new-born cat to a pet store to make a little extra money to keep his business from going under? Shortly afterward Jon arrived and bought the cat whose name was Garfield.

This is the fictitious story that explains the birth of Garfield. We can’t be 100% certain of his exact birthday, but we do have some clues that suggest that it’s June 19, 1978. Every Garfield strip dated on this day in fact shows Garfield celebrating his birthday.

This was also the date on which the comic strip of the famously lazy cat first appeared. His creator is Jim Davis, who named Garfield in honor of his grandfather and the former US President A. Garfield.

The comic strip Garfield, which later became a TV series and movies featured in theaters, tells the story of Garfield and his relationships with human characters (especially Jon) and other animals such as the dog Odie who also lives in the house.

Garfield’s success is based on the constructive criticism the comic directs toward animal lovers and Jon’s ironic assumption that he is Garfield’s master when in reality it’s the other way around; Garfield is the real master of the house.

Garfield’s personality is as recognizable as his appearance, which has changed considerably over the years. He started out as a very heavy cat with small eyes and a serious temperament. Later his eyes got bigger, he slimmed down a little and he began to smile frequently to appeal to readers. In 1983 he was given the ability to walk on two legs to make him more humanlike.

His personality experienced much less change. Garfield has always been cynical and sarcastic. He’s constantly making fun of Jon and his continued failure with women. Garfield considers himself to be in great physical shape. He befriends mice instead of chasing them (given his laziness), he loves lasagna and he deeply hates Mondays.