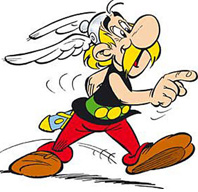 “The year is 50 BC. All Gaul is occupied by the Romans… All of it? No! One small village of indomitable Gauls still holds out against the invaders ...”

With these words on a map of Gaul in Roman times Asterix's adventures begin, a small but wily Frenchman and his best friend, the big simpleton Obelix. Did you know that Asterix and Obelix are two of the greatest characters of the comic world? Today their stories are translated into 107 different languages (even Latin) and it is very difficult to find someone who doesn’t know who they are.

We were tempted to say that the creators of Asterix and Obelix did not imagine how successful their characters would be when they began to publish cartoons in 1959. But perhaps the writer René Goscinny (yes, the same as that of Little Nicholas), knew that the Gaul would be great: the author, perhaps in jest, said he had chosen for the character a name beginning with "A" to appear in the first comic book encyclopedias of the future.

The idea was to create a hero who conveys values ​​such as strength, courage, simplicity and good humor. And what better time to do that than the Roman invasion of Gaul? Julius Caesar had subdued the Gallic tribes and its main warrior leaders like Vercingetorix, but what would have happened if some small Gaul village simply resisted the Romans, taking an astute and even carefree attitude about it?

The idea was perfect and both Rene Goscinny (writer) and Albert Uderzo (artist) got right to work on it. There was one problem: Goscinny wanted an "antihero" a small person without great physical strength, but very intelligent; Uderzo had imagined Asterix as a big, burly "supergaul". Eventually the idea of ​​the writer prevailed, but the artist could get his own back by creating a great companion for the innocent hero… and so Obelix was born.

The first Adventures of Asterix were published in “Pilote” magazine in 1959, a publication which already featured “Little Nicholas”. The little ones love reading about the wily Asterix as he struggles to carry out his outlandish plans; and the older ones enjoyed scanning the text for curious puns and topical jokes based upon current European affairs.

This is one of the biggest problems of the Asterix series. If you have read his adventures, you will have seen that, when faced with other peoples, they have very distinct national characteristics: the Celtiberians (Spanish) are party-lovers, the Bretons (English) are stuck up, and the Goths (Germans) are militant. Some see a certain element of racism in the portrayals, although they were created to be harmless jokes.

On the other hand there are those who’ve questioned the historical accuracy of the comics. A recent study revealed that the true Gallic culture was more "refined" than was believed: a place where residents lived in cities with tall buildings, temples, palaces and advanced gates… no thatched huts in small villages surrounded by a fence! There was talk of re-writing all the stories to make them more "accurate"; but Uderzo, who after the death of Goscinny in 1977 was also in charge of the script, said he had no intention of changing anything.

And thank goodness that nothing was touched! For us and many other Asterix is a true Gaul, although not historically accurate: a brave, loyal friend, unable to cope with injustice. That's what makes a hero!

How can we help you?Speak with an advisor for personalized attention
Receive Information
“May Joke”
Copying [Read joke]