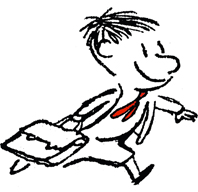 If you study French you Hill surely have read some chapters in the books of Young Nicholas (Le petit Nicolas). Or maybe you came across one of his adventures in your school’s library. If you have carefully read them, apart from having a good time you probably have exclaimed at some point “that’s true! A very similar thing happened to me during the break at school!”

How are we not going to relate to such a nice student, mischievous but very loyal to his friends? Even though 57 years have passed since the first volume was published, things haven’t changed so much, and every school’s classroom has the glutton, the smarty-pants, the bad-tempered girl and the bully…

Did you know that Young Nicholas is not so young anymore? His school year started in 1956, and at that time his stories were short, and were published in the Belgian magazine Le Moustique. From 1959 on, he would move to the French magazines Sud-Ouest Dimanche and Pilote. From this last one he took his big leap to children’s literature.

And what caused this fame? In the first place, it was because his stories and adventures were very amusing, and narrated with a lot of humor what happened in a classroom’s daily life; and secondly because adults also enjoyed his stories, because Nicholas’ creator, René Goscinny, used the children’s view to complain ironically about the world of the adults; and thirdly because the magazine Pilote also published the stories of Asterix, Lucky Luke or Blueberry (all of them legends of the European comic culture).

So it turned out that these entertaining stories were also of a great literary quality, and were complemented by drawings and illustrations of interesting characters. Everything seemed meticulously planned for success. The question was how the character would work on its own.

The answer would not take too long: in 1960 came out the first book of the “Young Nicholas” series, and was devoured by both parents and children. Since then, 10 million copies have been sold in more than 30 countries worldwide. This saga is composed of Young Nicholas (1960), Nicholas Again (1961), Nicholas on Vacation (1962), Nicholas and the Gang (1963) and Nicholas in Trouble (1964). In more recent times three different books have come out, entitled Young Nicholas goes back to school, Young Nicholas: Hello? And Young Nicholas: the joke, all of them published in 2005. As you can see, some years went by between the new publications and the original ones. This has a reason: in 2004 Goscinny’s daughter found a volume with several unpublished stories.

By the way, we are going to be a bit mischievous now, just like Nicholas himself. Do you know which of these books was that which sold the least copies? Well, it was Nicholas in Trouble, and not because it was the worst of them all, but because in Spain it was translated as Joachim in trouble, and people thought that it had nothing to do with the series. This has been corrected in the latest editions, restoring it to its original name.
This is all we are going to tell you about Nicholas. What’s more, just as if we were one of Nicholas’ teachers we are going to tell you to read his books; you are surely going to love them!