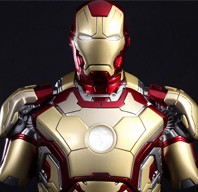 The richest, cockiest and “boltest” superhero is back on the big screen with his third adventure. This time, neither his money nor his powerful armor will keep him from the power of one of the most powerful super villains of all times: the Mandarin, a genius of evil that will do everything in his hand to destroy the hero and the person inside the armor with his plans and his ten rings of power. Tony Stark has a very difficult task ahead this time.

We mean that it looks very difficult on paper, in the screenplay, because it very well might be that he is triumphant in the film. Since the first film with the adventures of Iron Man was released, it seems that only good actors get a role in the series, that the screenplays are solid and well constructed, and go beyond the pure adventure and the eye-catching visual effects.

Now it seems impossible that the enterprise was risky at first: the Iron Man in the comic books was a character down in the dumps, which had seen better days and to which the Marvel fans didn’t pay too much attention. Several times was his story rewritten and reissued, but it all was in vain, until Marvel chose it for a “serious” movie. The project went around in circles, specially about the actor who would portray Tony stark (other options were Tom Cruise or Nicholas Cage), and for most people choosing Robert Downey Jr. was very risky because he had forged quite a bad reputation.

But the truth is that, maybe because there weren’t many expectations about it, the Iron Man film saga has turned into one of the best values superhero movies after the new Batman saga. Funny: both stories have as a main character a wealthy man who puts on an armor to fight crime. Maybe it is because we have all wished sometimes to have a lot of money to buy toys and that, unlike other superheroes, these haven’t been born in another planet nor have been bit by radioactive spiders. What separates us from Iron Man is also what brings him closer to us, and maybe that is why we like his movies so much.