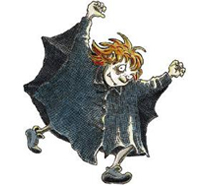 The Little Vampire is a series of children’s novels about two characters named Anton Bohnsack and Rüdiger von Schlotterstein. Angela Sommer-Bodenburg is the creator of the books.

Ever since the first novel was published in 1979, the series has earned great popular and critical acclaim. Today, twenty novels in total are based on the adventures of this pair of eccentric friends and the world of vampires. Several TV series, plays, and movies have also been based on the books.

The main characters
The Little Vampire published in 1979 introduces readers to Anton and Rüdiger. Anton is a bright 9 year old boy who is fascinated by vampires and horror novels. At first he’s a shy young man but after experiencing exciting adventures with his friend Rüdiger (who is a vampire) and his sister Anna, he becomes a brave and outgoing person.
Rüdiger became a vampire as a boy and in the stories he is 150 years old. Despite his advanced age he’s still a kid who perfectly gets along with Anton. Throughout the books the friends embark on countless adventures, from confrontations with other vampires to finding childhood romance.

The little vampire on TV and in the movies
The TV series about the little vampire have always been moderately received. The first one was a German-Canadian coproduction created in 1983 while the 1993 series was an entirely German effort. Although they didn’t last long, they were both big hits with kids. The little vampire also made it to the big screen in 2000 in a movie directed by Uli Edel which took certain liberties in regards to the story from the original novel.