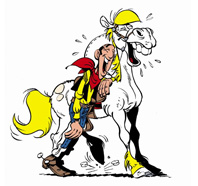 Lucky Luke is a cowboy character from one of Europe’s most popular comic books. Although he gets into exciting adventures all around the old American west, he was curiously born in Belgium.

Lucky Luke is a solitary cowboy who’s always fighting bandits and criminals, helping those in need, and getting into trouble. He’s known by all as one of the fastest gun slingers in the west and his aim is perfect. He always wears the same clothes: boots, blue pants, yellow shirt, an unmistakable red handkerchief around his neck, a white hat, and although it’s not a piece clothing, he always chews on a piece of straw. All this helps make him immediately recognizable.

This cowboy, known as being faster than his shadow, is always with Jolly Jumper, the smartest horse in the world. The two understand each other perfectly with just a glance. They make an invincible pair. The same can’t be said however about their enemies: the Dalton brothers. These four bandits of differing heights but identical appearance are always breaking out of jail to continue breaking the law and to get back at Lucky Luke. They’re just not sharp enough for Lucky though, who always foils their plans and sends them back to jail. But there are more enemies in the Wild West: the Jesse James gang, Billy the Kid and Calamity Jane… it’s a dangerous place that needs a hero like Lucky Luke.

After successfully saving innocent lives and imprisoning bad guys, Lucky Luke always calmly rides off on Jolly Jumper singing a song. The tall lanky hero knows that his work is never done and that soon he’ll get into more adventures.