Sponge Out of Water 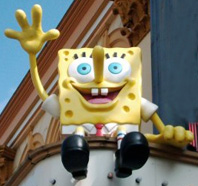 SpongeBob SquarePants returns to the big screen 10 years after his last appearance and true to form, he returns accompanied by Patrick, Squidward and Mr. Crabs. On this occasion, an evil pirate robs Mr. Crabs' secret Crabby Patty recipe and places the existence of Bikini Bottom in danger. To recover the secret recipe and save Bikini Bottom, SpongeBob, Patrick, Squidward, Sandy and Mr. Crabs will all go on an adventure; leaving behind Bikini Bottom and become superheroes willing to leave the water and take on whatever comes at them.

As you can imagine, this movie is more spectacular than the TV show, combines 2D and 3D animation, a wilder story than usual and plenty of funny scenes.

Today, SpongeBob continues to be one of the most watched cartoons and is loved by children and adults alike. SpongeBob's do-good nature is always putting him in difficult situation and attracts huge problems—all for trying to be nice—to him and his very patient friends.

According to the producers, if this movie does well at the box office we probably won't have to wait another 10 years for a follow up. SpongeBob isn't just a television show; he is a cultural and pop icon that has reached audiences around the world. Like in Spain, the United States and Japan, SpongeBob has legions of fans of all ages anxiously awaiting every new episode.

Whether or not the movie is a hit, this movie is the most anticipated animated film of 2015. The trailer has received thousands of views through social media and for this publicity alone they say that making this movie has been worth it. Whether or not that is the case depends on movie goers—especially the younger ones—to determine whether or not it was worth the wait.