Popular games from our grandparent’s time 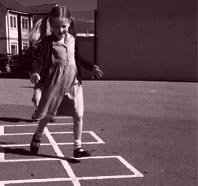 Our grandparents enjoyed playing popular games on the playground at school and in their free time after class. Children still play some of these games today. The popularity of these activities and the physical benefits they provide have motivated many P.E. teachers to include them in their classes.

El pañuelo (handkerchief)
This is one of the popular games from our grandparent’s time that has been most used in gym classes up until today. Players are first divided into two groups. Then each player takes a number, so there will be two 1s, two 2s, two 3s, and so on until everyone has a number.
A referee in the middle of the players holds a handkerchief out, holding it by the tips of the fingers. The referee calls a number and the players with that number must run and grab the handkerchief and go back to their places.

La rayuela (hopscotch)
As a game of entertainment, hopscotch has made it to our days in countless versions. In our grandparent’s age however, entertainment options were much more limited, which is why they learned to invent games with just a piece of chalk, a stone, and the ground.
Hopscotch involves drawing a geometric figure on the ground with cells of squares or triangles that are about the same size. Each cell has a number drawn inside. Players take turns throwing the stone into each cell, which they must reach by hopping. Originally the game was played by attempting to toss the stone into each square in numerical order. The exercise helps improve balance and resistance.

Encantados (bewitched)
This popular tagging game was common in gym classes given the enormous benefits players got out of it. One player has to be the first to catch someone else out of the rest of the players. When someone gets tagged then they become “bewitched” and they can’t move until another player “unbewitches” them. The person doing the tagging must tag the rest of the players and keep them away from the players who they’ve already bewitched.
In one variation of this game, “bewitched” players must join the tagger. At first it may not be easy to catch other players, but the fewer unbewitched players left in the game the harder it is for them to avoid getting tagged.
Gym teachers liked this popular game because it developed strategy abilities, speed, and team work.