Where do the musical notes come from? 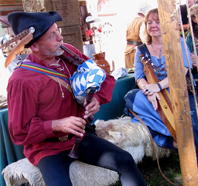 Today the musical notes marked by the letters DO, RE, MI, FA, and SOL are so familiar to us that it’s hard to imagine a time before they were invented. It may also seem that the five horizontal lines of thestaff have always existed. This musical notation system however has not always been used.

The use of musical notes and the staff have helped make it easier to represent music on paper and popularize songs around the world. But like everything, musical notes had to be created at some time.

The notes were created for the first time in the 11th century –1,000 years ago! They were the idea of a monk named Guido D’Arezzo and they originally weren’t exactly like the notes we know today. He came up with the idea to give each musical note a name and to place them on a staff with 4 lines. < /p> To choose the name of each letter, the monk chose a hymn dedicated to Saint John the Baptist which was called “Ut queant laxis”. Using the first syllable of each line from the song, Guido D’Arezzo chose the syllables for the musical notes:
Ut queant laxis
Resonare fibris
Mira gestorum
Famuli tuorum
Solve polluti
Labii reatum
Sancte loannes

The words have been translated as: So that your servants may, with loosened voices, resound the wonders of your deeds, clean the guilt from our stained lips, O Saint John.

A little while later (600 years later that is!) the musicologist Giovanni Battista Doni decided to change the first syllable from UT to DO as it’s known today. It’s still not known whether this was a religious decision as DO may come from Dóminus (Lord in Latin) or if it was inspired by pride, since his last name starts with DO (Doni).

The four-line staff created by Guido D’Arezzo was used to note the musical pitch of the notes. With musicians being able to differentiate between high and low notes in musical notation, musical traditions grew in richness and depth.

Ugolino de Forlí was the creator of the official five-line staff which extended from Italy to France to the Europe and finally to the entire world.