When was the first Christmas celebrated? 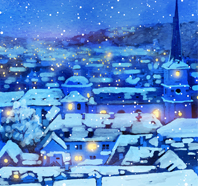 Christmas is a festival that dates back to the final centuries of the Roman Empire. Before December 25th was adopted by Christians as the date to celebrate the birth of Jesus of Nazareth, the Romans celebrated the festival of the Sol Invictus on the night of the same day. These “unconquered sun” festivities were held over several days until the final celebration on the 25th which was considered Rome’s most important social event of the year. It was a time when the streets filled with merry-making and many enjoyed feastly dinners in their homes, dances, and all kinds of entertainment.

Experts disagree on the exact date on which the first Christmas was held, although they all seem to agree that it happened sometime within a 30 year period in the mid 4th century. The following is a look at the dates most used and considered official in different encyclopedias and papal documents.

Calculations had placed the date of Jesus’ birth in the summer, but to facilitate Romans acceptance of Christianity, Pope Julius I requested to celebrate the birth of Jesus on par with the Sol Invictus, and it ended up being celebrated together with the pagan festival. This occurred in 350. Four years would pass until Pope Liberius approved the date as an official celebration. The Christian and the pagan festival blended and Rome effectively took advantage of the importance already placed on these dates by the Romans.

The first Christmas banquet is considered to have taken place in Constantinople in the year 379. From that year on, the tradition began to spread to the rest of the Roman Empire. A century later, it had reached Egypt and over time it continued blending with other pagan festivals until the Christmas season ended up being observed from December 25 to January 6.

Evidence suggests that the tradition didn’t emerge as a spontaneous act and it didn’t happen overnight either. It was different than the Christmas meal that we know today, although people had already been putting on banquets and getting together with family given the tradition’s origins in the Sol Invictus celebration.

In the final decades of the Roman Empire, it had adopted Christianity, and most of the population was Christian (including Cesar). It’s important to know all this to understand the tradition’s importance and extensive influence in an empire that covered a vast area during the same period.

Knowing Christmas’ early beginnings and how it was passed down to modern times is a good way to learn how to celebrate the holiday season in an appropriate context. People make history, it doesn’t just make itself, and a process of adaptation occurred that brought about a number of changes in holiday traditions over the centuries. Maintaining a custom over so many years is something to be proud of, and it’s of course something to enjoy.