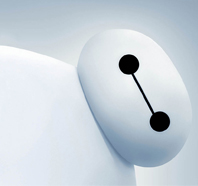 Big Hero 6 is the new movie from Walt Disney, an adaptation of the popular action and adventure comics of the same name by Steven T. Seagle.

It tells the tale of an ingenious young man named Hiro Hamada, who is a big fan of robots. Unfortunately, he loses his brother when he was trying to arrest members of a dangerous gang lead by a villain named Yokai. In an attempt to avenge the loss of his brother, Hiro Hamada creates Baymax, a robot with a strong personality who will helps his creator fight crime. The pair will discover other super heroes who will help them in their attempts to make the city a better place. The story takes place in a high-tech future that includes a vision of what the cities we know today may soon look like.

The best part of the movie is its cast of characters. Hiro Hamada is an adorable adolescent who inspires great empathy. The robot Baymax charms audiences with his cleverness and unpredictability. The superheroes that they come across fulfill viewers’ expectations of finding different abilities and personalities which can be seen today in a number of films of the same genre. This may all remind of The Incredibles, but Big Hero 6 definitely has its own identity and it effectively makes a name for itself among the competition.

Another positive aspect of this movie is its quick pace; throughout its 108 minutes, there’s not one minute to relax, which keeps both kids and adults entertained from beginning to end. That’s the great thing about Disney, specialists in animated films; they make good films and bad ones but they always have a solid script and they’re always advanced on a technical level. It’s also nice to see the constant change in registers seen in Disney movies. Not including the Toy Story movies, they avoid reusing topics or characters, even ones that have earned great success. We’d all love to see a sequel to Monsters Inc., but they prefer making something new like Up or Frozen. They don’t just go with the easiest option, they try something new, and they usually don’t disappoint.