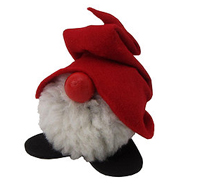 The tradition of giving and receiving Christmas gifts is common in many cultures, but there are some differences in terms of the figure who delivers the presents. Gnomes, rogues, old ladies, or in Spain the three kings (los Reyes Magos), all deposit gifts in the homes of well-behaved children and they offer reprimands to the not so well-behaved.

The Tomte
In Scandinavia, presents are traditionally delivered by the Tomte, or Nisse: playful and friendly little gnomes. Local lore has it that the Tomte would keep watch over family farms. The Christian influence however ended up blending their tale with Christmas traditions and the role of the gnomes changed. Today, the Tomte live in the forest and they help Santa Claus deliver gifts. According to tradition, one member of the family dresses up as a Tomte and hands out presents to the kids.

Pere Noel and Pere Fouettard
In France, gifts are traditionally delivered by Pere Noel. This French Santa is similar to most except that he rides a donkey and gives gifts on St. Nicholas Day: December 6. Pere Noel is accompanied by his helper Pere Fouettard (French for father whipper, a Christmas character who instead of gifts delivers whippings to ill-behaved kids.

La Befana
In Italy, gifts are given by an old witch known as La Befana. Legend has it that the three wise men asked La Befana how to find baby Jesus. She decided to accompany them but later backed out of the journey. She’s regretted it ever since, and she pays homage to the wise men by leaving candy or coal, depending on how kids have behaved.

Jesus as a child or Kris Kringle
In some Latin American countries and in Germany and Austria, it’s Jesus as a child or Kris Kringle (Christkind in German) one who delivers gifts, a figure who recalls the three kings. Martin Luther was the one who, in the 16th century, popularized the custom in the hopes of making religion the focus of the holidays instead of St. Nicholas. Ever since, this figure has been represented as a child with blond hair and angel wings.

Ded Moroz
Ded Moroz, or Old man Frost, is in charge of giving gifts in Slavonic countries. Ded Moroz is an old man with a white beard who dresses in red and rides a “troika”, a sled in the form of a horse. According to legend, he was an evil wizard who kidnapped children to ask for a ransom for their return. Today, he delivers gifts to kids on Christmas Eve and on New Year’s Day to redeem himself for his bad deeds.

St. Nicholas
In the Netherlands and in Finland, presents are given by St. Nicholas, a figure who is similar to Santa Claus. Sporting a traditional red suit and a white beard, he travels to the Netherlands from Spain on a steam ship around the end of November. After debarking, St. Nick parades through the streets of the city greeting Dutch kids. He is accompanied by Black Peter, a child who helps deliver the gifts. St. Nicholas brings gifts to children on December 5, but he’s not the one who delivers them; Black Peter climbs down the chimney to deposit gifts in the homes of good kids and coal in the homes of bad kids.