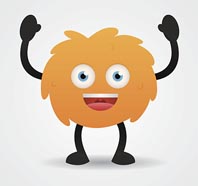 A curious phenomenon arises in some children between the ages of two and eight years old: many boys and girls start having imaginary friends. They don't have to be invisible entities either; they can also be stuffed animals and dolls that children have given a personality.

But why are they created? Some experts say it is due to a child's need to express and communicate their feelings; others believe it is a result of the development of children's imagination; and there are also those who think that these "friends" are born to satisfy a personal need.

Given our position, we don't want to influence the opinion of the parents; but we do want to draw your attention to a few studies on this issue. One of them was carried out at the La Trobe University in Melbourne and after a survey of 330 of its students, it concluded that those who had imaginary friends showed a greater aptitude for communication, a higher level of empathy and were more creative. The other study was carried about by the University of Manchester and, after a survey of children between three and 6 years old, concluded that those who had imaginary friends had a wider vocabulary and were more experienced communicators.