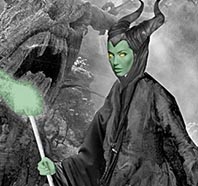 A lot of writers think that the "goodies" are great characters; but what are more complicated to create are the "baddies": What makes a character want to be evil, fight the heroes and want to rule the world? Often we find that this "baddy" used to be good, but something happened in their past to change them.

This is what we see in "Maleficent". If you have seen "Sleeping Beauty", you will know that Maleficent is the evil stepmother who cursed poor Aurora. But what we did not know, was that a long time ago, Maleficent was a sweet, beautiful and good willing young girl who would do anything to help people. What happened to make her become of the most evil people in this tale?

Before the release of the film that has already become a phenomenon: the story of "Sleeping Beauty" is told from "the other side", Maleficent is played by Angelina Jolie and the whole world is curious about the amazing special effects. Will the film live up to expectations? Now we will see...