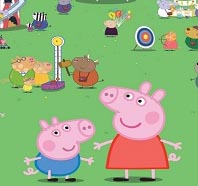 This kind little pig has become a great revelation. Her series is show in around 180 countries and her articles and games can be found in every shop. What is the secret to Peppa Pig’s success? Why is she so popular with both children and adults alike?

The first thing that caught our eye, is that the drawings have been done as if they were those of a child: very defined lines, characters constructed from simple figures…It’s as if they have taken our little drawings from class and transformed them into a series!

Secondly, we should mention the length of each chapter: barely five minutes, but they offer a lot. Because of their short nature, we can follow them without stopping and get into a very well-constructed story.

Thirdly, there are the characters. They are more complex than they seem and have personalities with strengths and weaknesses: for example, Peppa is a bit cheeky and her father is very forgetful. After all, what child has never answered back…and what parent has not had a moment of forgetfulness?

With these three favorable characteristics it is understandable that the television channels saw that Peppa’s adventures would go on to be a success. But did you know that the first channel that wanted to show the series did not want to know anything about Peppa? However, her creators did not back down and talked to various other channels, and in the end, they were successful.

It is not the first time that we have told you a story about other characters, right? We can learn a good lesson about this: never give up!